Because this post deals with a pretty heavy subject, I wanted to start with something funny.

I have a document of 300+ pages I keep for email ideas and inspiration, and I'd made a note of a You Tube video with a hilarious exchange between "Reverend" Jim Ignatowski and Bobby Wheeler from the sitcom Taxi.

But when I clicked the link, the video had been removed.

Because our existence is so absurd, I wanted to juxtapose death and humor, and I felt that Bobby (played by Jeff Conway who died of an overdose) and Jim would bring some levity to the subject.

I couldn't find the scene, but I did find this quote:

Bobby: "Hey Jim, we were wondering if you could join us for a few minutes?" 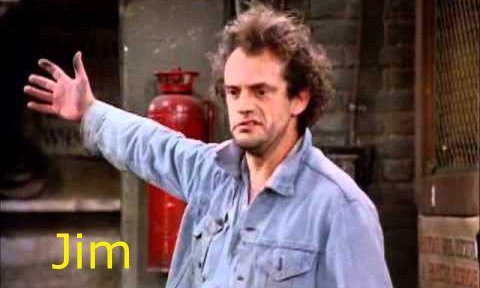 As I write Kate Spade and Anthony Bourdain have just taken their own lives.

I hadn't heard of Kate, but I was pretty shocked to hear about Anthony, because from what I could see he had “it” together, then I discovered he had been a major drug addict so that was a hint of some demons …

This has hit me close to home recently.

On my birthday in February I found out that one of my best friends has terminal cancer.

Later that day I received a tearful phone call from my niece who told me she couldn't make it to my party because her partners Father was in hospital after a (thankfully) unsuccessful suicide attempt.

I thought it was rather ironic that my sick friend wanted to live and another guy, who wasn’t terminally ill, wanted to die.

Not long after another friend decided she wanted to “permanently check out’.

This had been on the cards for a while and she had made half-hearted attempts in the past.

I knew her well, but we’d fallen out and drifted out of contact, but before it happened I had an unusual feeling she was in a “stuck” place, so I sent her a short note.

I did not hear back and talking about her passing later, my way of explaining things was:

When you are in pain you have several options:

But if you take the path of least resistance, like a little snowball gaining size, the problem grows with time.

I'm a believer in Option 2.

I have been in some very dark places, but somehow, I've remained curious as to how “this” will turn out, so sooner or later, in spite of myself, I end up accepting and embracing change.

I feel that life is a constant force and that we are always growing.

If we try and stop ourselves growing up and past our comfort zones towards light, we still grow but back round and around ourselves to end up bitter, twisted and contorted by the pain we are trying to avoid.

The anonymous journalist Film Crit Hulk wrote a great post published in the Observer in response to Anthony’s passing where he identifies the root cause as unresolved trauma and suicide as the ultimate coping mechanism, this was certainly true in my friends’ case = option 2 beats option 4 again.

I saw a post on Facebook about Kate Spade and Anthony Bourdain which stated that 8,000 people committed suicide over the last 3 days.

That's a million people a year. 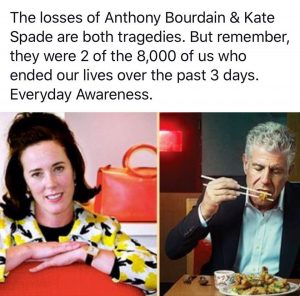 I was so shocked, I reposted the pic on my Facebook page with the comment “Very sad, but the question is ... does suicide solve ‘The Problem’?”

No asked me what ‘The Problem’ is, or if suicide solves it.

Then last night – and this was perhaps the unconscious inspiration for today's post – I saw a You Tube video about the Golden Gate Bridge.

Apparently, it's the world’s most popular suicide spot.

One young man who leapt off the bridge, left a note where he wrote that he was “sure he didn’t belong here.”

So, if you're struggling with these thoughts, my question to you is …

Are you sure that you don't belong here?

Are you sure the world will be a better place without you in it?

Are you sure you're not loved?

Are you sure no one cares - or could ever care?

Are you sure no one will really be hurt by you not being here?

‘Cos if you're not sure and you stick with option 2, yes it's hard, but it does get better.

And if you see someone drowning, reach out … you might just save a life.