Do You Need Love To Live?

I was a bright disruptive student more interested in being the center of attention and making the girls laugh than learning.

Our classroom was on the second story of the school building and during a particularly boring Science test one day I had an idea.

I made sure I had a seat next to the window and during the test I cut out some fingers in the shape of a hand giving the "two-finger" salute.

Then from one of my girl classmates friends I managed to get a hold of some string.

I joined the string to the top of the two fingers and lowered it out the window so it was waving outside the windows of the class below.

Then I pulled the string up and down - giving everyone the fingers! 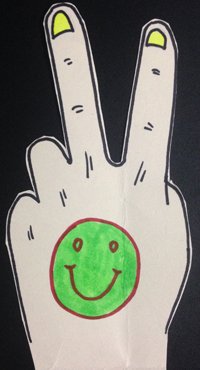 Because our class above was having a test we were very quiet, but soon I could hear screams of laughter from the class below.

The teacher of the class downstairs was the Senior head of the Math department and had a sense of humor as absent as a waterfall in the desert.

He ran outside his classroom, grabbed the fingers and angrily tearing the string from my hands stormed upstairs to confront the Science teacher.

"Do you have any idea what your students are doing?!" he yelled.

The Science teacher was a little stunned when replying blankly, "Yes, were having a test."

Our teachers apparent ignorance further infuriated the Math teacher, "During your test one of your students has been making rude hand gestures, hanging them out the top window and pulling them up and down outside my class -- giving me the f-f-fingers!" he sputtered.

At this point the Math teacher his face as red as a beet, thrust his hand into his pocket and produced the offending fingers which he held in our teachers face.

My class collapsed into laughter.

The Math teacher was shouting so loud that his class below could hear every word so now they too were shouting and hollering.

The noise was so loud that the teacher from the classroom next door came in to see what was going on.

With two other teachers there, our teacher knew he had to find who was responsible, so looking around the class he asked, "Okay, who did this?"

But when his eyes naturally moved to my direction he could see the grin on my face.

"Right Harley - you're off to the Principals office."

I rose slowly and deliberately from my chair and feeling the full glow of admiration from my classmates behind me, I walked out.

On my way to the Principals office I deliberately walked past the class below that had seen my cut out fingers.

They yelled and cheered and held their hands out the window for high fives.

I walked the path to the Principals office feeling like a school hero.

I got detention after school for that, but it was worth it.

Without getting personal I have always enjoyed arguing, I find it's a great way to keep my mind sharp.

I intend to be one of those old people whose mind is still "sharp as a tack" - although I lose my phone so often I'm wondering if that's just wishful thinking.

I am also pretty clear in my opinions, so I had no problem in English class arguing about the statement, "We need love to live."

The teacher asked the class, "Who thinks that we need love to live?"

Everyone in the class put up their hands.

The teacher turned to me and asked me why I hadn't raised my hand.

"I don't need love to live," I stated confidently.

"Yes you do!" shouted my buddy Debbie.

This went on for a while with me arguing back and forth with the whole class including the teacher.

To try and prove my point I finally shouted, "I could easily live on a desert island without love!"

Eventually the class discussion moved on and I'll bet all of them forgot about that debate that afternoon, but I never have.

In the years since I have wondered if I was right.

For many years I told myself the way you do when you're trying to convince yourself something, that I didn’t need love to live.

But as I grew older I became more and more uncomfortable with that thought ...

What if I was the last person in the world and I could have all the motorbikes and cars and shoes and money that I wanted, but I had no one to share it with - would I be happy?

Maybe for a while … but sooner or later I would want someone to share it with.

Now I think I was wrong.

I could survive without love, but I'm not sure life would be worth living.

Now I believe that love is our "raison d'etre" - our "reason for being."

We couldn't survive without others.

We couldn't even make ourselves a sandwich without relying on others.

We need someone to grow and harvest the wheat, bake the bread, deliver it to the store, sell it to us and drive us home - and that's just bread, without considering everything else that goes into a sandwich.

It's the same with everything from shoes to electricity.

When career coaching I am often surprised how many people are motivated by "making a difference."

Maybe that is a part of our better natures - we want to contribute something to the world and leave it a little better than we found it.

Discussing this with my clients I've come to understand that just about every job helps others somehow - teachers, doctors, nurses and firemen are obvious examples.

But so is the person working for the water company, the guy who mows my grass and the girl who cuts what's left of my hair.

Not to mention the farmer, the newsreader, the garbage truck driver, etc.

It's actually hard to find a job that doesn't benefit someone else.

That's great because many studies have shown that it's compassion that helps us feel happy and gives our life meaning.

Jackie Robinson was the first African American to play Major League Baseball and copped plenty of racist abuse from people who were threatened by him.

Did this make him angry and bitter? 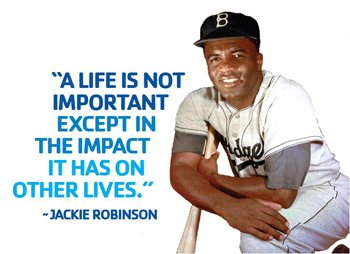 Albert Einstein, the greatest mind of the 20th century ... 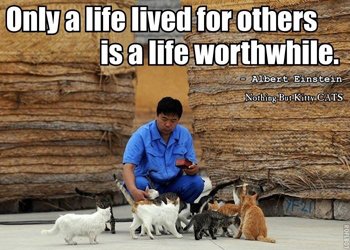 Matthieu Ricard is a monk often referred to as the "happiest man in the world!"

How do they know that?

The University of Wisconsin measured his brain! 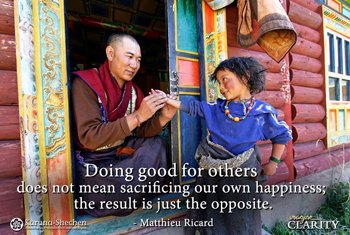 What's The Key To Happiness? 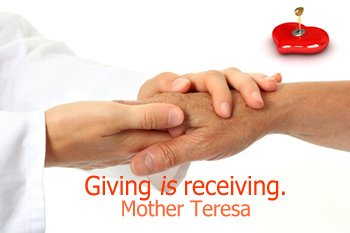 I hope that's inspired you to share some love and compassion today!