Rest In Peace, Queen Of Soul

As I write the Queen of Soul has just left this earth to join the heavenly choir.

She passed on August 16 - the same day as the King, so I'm guessing Aretha and Elvis will be singing up a storm!

When I first heard Aretha I wondered what all the fuss was about, then I heard her stuff from the 60's - has there ever been a more effortless and soulful pop vocal?

Great artists move us because they can channel their pain and loss into their art, Aretha did not have it easy.

Her parents separated young and her Mother died before her tenth birthday.

She had two children by the age of 14, her first marriage was unhappy and marred by rumors of abuse.

The producer of her breakthrough hit Natural Woman, was convinced that the sorrow in her relationship informed her deeply soulful vocal on a track which launched her career and sent her star soaring so high that by the time of Dr. Martin Luther King’s tragic passing, Aretha was the one honored to sing at his funeral.

Eleven years later, her Father was shot at his home, and in the following years she witnessed the death of more close family members.

But Aretha channeled her pain.

As I was researching her songs on You Tube, I saw one video entitled: 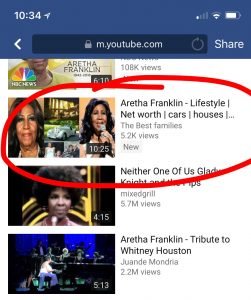 I think Aretha would be the first to admit that cars, houses and money don't really matter in the end.

The love that you have in your heart for the people in your life, the love in their hearts for you and the memories you leave them with when it’s your time to pass on.

I believe Aretha showed us love by singing.

So in Aretha’s honor, I would like to share three of my favorite songs from her long and extensive repertoire. 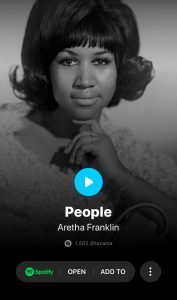 This song obsessed me because I could not find out who sang it.

I first heard it back in the days of CD's, when I was given the disc without a case so I had no idea who sang it.

Now I’d just look at my phone, ask Siri “who sings this?” and within a second or two Shazam will tell me, but back in the day it was blind luck and asking other people!

The lyrics, “people who need people, are the luckiest people in the world,” have always represented a challenge to me.

I’ve often had difficulty letting people into my life.

When I was 14 in school, I was the odd one out in my entire English class by adamantly stating that “I could live without love,” and “didn’t need love to live.”

If you’d asked me at that time why I believed that I didn’t need love, I couldn't have told you, but if I'd met a good Coach who could bring some awareness it would have been based on the logic that “if you don’t need people and you don’t have them, you’re okay ...

but, if you do need people and you don’t have them then you have a problem.”

So these lyrics represent a challenge to admit to myself that I need people and to let people in.

2. Do Right Woman, Do Right Man

This one gets me as a musician ... eight bars of divine introduction taking the express elevator straight to the heart of your soul.

A honey sweet organ and a silky smooth bass begin the song before abruptly stopping.

And then we hear Aretha’s all by herself beginning her close, gentle, intimate vocal.

Next to the song “I Can't Make You Love Me,” by Bonnie Riatt and George Michael amongst others, for me this is the ultimate song of unrequited love, beginning with the lines:

I hope these tracks move you the way they move me.

And yes this is a life coaching blog but if you relate to this songs and take the time to listen to them you can't help but feel the emotion.

And when we are truly present, and we really feel, we heal.

So I'm wishing you a little bit of healing today,