Tolerance Does Not Mean Tolerating Intolerance!

After following him on Facebook for years, I couldn't wait to see him in person.

As soon as the event was announced I bought a ticket right away, and waited eagerly for three months until the day of his talk finally arrived.

I had no idea what he was going to talk about.

After making his introduction, he said, “Tonight I want to talk about compassion.”

He went on to say that we should have compassion for all sides of an argument.

And how although we may violently disagree with what someone believes, we should still see them as another human being who believes as they do as a result of their life experiences, their education and their level of awareness.

If we don't have the same compassion for our “enemies” as we do for our loved ones, we can’t really call ourselves compassionate.

Christ advised his followers to, “love your enemies,” and “be kind to those who do you harm.”

As I write this, there is much debate about the way the world is going, especially between those on the left and right of the political spectrum.

What is the appropriate response when your views – or yourself – are met with hate?

What should you do when you are abused for the color of your skin, your religion, your gender, how you look or the way you are dressed?

It is human nature to meet anger with anger and hate with hate.

But is that best for us, best for the people on the other side and best for our society and our world?

“Be Careful When Fighting A Monster, That You Do Not Become A Monster.”

Abortion rights are one issue that divides people, with very strong feelings on both sides.

But if we lose compassion for the people on the other side, we can become hypocrites like anti-abortionists protesting against killing who end up killing abortion Doctors.

There needs to be another way, and when we look at how some recent injustices in history were resolved, we may find some clues …

The great civil rights leader, Dr. Martin Luther King believed that nonviolent protest was the best way to change a racist and unjust society, saying that:

“Hate cannot drive out hate; only love can do that.”

"Love is the only force capable of transforming an enemy into a friend."

Some civil rights leaders in his time argued that violence must be met by violence.

But Dr. King said, “we must meet violence with nonviolence.”

Who were Dr. Kings inspirations?

In 1959, before he assumed the role as leader of the US Civil Rights Movement, Dr. King visited India.

He admired Gandhi, whose peaceful resistance led the Indian people away from oppressive British rule to self-governance.

Gandhi said that, “if someone gives us pain through ignorance, we shall win him through love,” and "real courage and humanity consist in not returning a kick for a kick.” 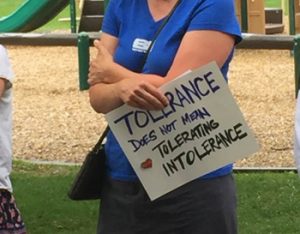 A friend of mine posted this picture as a result of the current political situation in the US.

I didn’t agree with the sign and commented, "'Tolerance does not mean tolerating intolerance?' - that's exactly what it means!"

Another friend wrote, "Hating and hating hate, are not the same thing."

I wrote, "How are they different? Hate is hate. Do you hate their hate or hate the haters?"

I went on to add that "Dr. Martin Luther King didn’t hate the white racists and look what he achieved. Hatred does not cease by hatred, but only by love."

The conversation went back and forth and no-one agreed with me so attempting to bring some humor to the situation I wrote;

"What?! You disagree with me! I feel extremely intolerant of your intolerance! :-)"

Finally someone with more wisdom then me cut to the core of the matter, writing:

"All appearances are a reflection of our minds.
If we want to change what is reflected we first need to change our attitude and perception of them.
That means not meeting hate with hate.
Not meeting like with like.
At all times maintaining a view of compassion, emptiness and interdependence.
For oneself and the 'enemy' "

I didn’t think I could improve on that, so I left it there.

How do you feel?

What do you think?

What is the most skillful response when met with fear and hate fueled by ignorance?

Have your say below!